Actress Asia Argento was reunited with journalist Hugo Clement over the weekend in Rome.

The joyful and jubilant pair were photographed smiling as they strolled through the Italian capital, just weeks after Clement, 28, posted Argento’s powerful speech at the closing ceremony of the Cannes Film Festival in which she attacked Harvey Weinstein and called the annual event his ‘hunting ground.’

Photos show the two embracing and smiling just days before Weinstein’s indictment on two counts of rape and one count of criminal sexual act.

Argento is also enjoying some incredible professional success of recent, having been named as a new judge on the Italian version of X Factor.

In addition, she directed the episode of Antony Bourdain: Parts Unknown that aired this week in the United States, which took the host to Hing Kong.

Finally, she posted a video to her Instagram account on Tuesday revealing she was recording new commentary for a re-release of the film she made in the wake of her alleged sexual assault by Weinstein, The Scarlett Diva.

Celebratory mood: Asia Argento spent the weekend in Rome with reporter Hugo Clement, with the two seen smiling as they walked through the streets of Rome (Argento and Clement above on Sunday)

Happy pair: The pair were seen affectionately embracing just and laughing with a group of friends just a few weeks after attending the Cannes Film Festival (above on Sunday)

Bourdain said in a blog post last week that when the director he had hired to shoot the episode had to undergo emergency surgery he hired Argento to take over, noting it was ‘fair to say’ he and the actress were ‘quite close.’

Bourdain has been one of Argento’s most vocal supporters on social media ever since she came forward with her allegations, and after her powerful Cannes speech tweeted: ‘Brava @AsiaArgento. An absolutely fearless off-script nuclear bomb of a speech to a stunned crowd at #Cannes.’

He also thanked Spike Lee for making a point of speaking to Argento after she shared her remarks, with the actress later noting most attendees avoided her in the wake of her speech.

It was Clement who posted the speech after accompanying Argento to the ceremony, writing: ‘The powerful speech @AsiaArgento [delievered] during the closing ceremony of Cannes. “I was raped here in 1997 by Harvey Weinstein.”

In her remarks Argento also stated:  ‘This festival was his hunting ground. I want to make a prediction: Harvey Weinstein will never be welcomed here ever again. He will live in disgrace, shunned by a film community that once embraced him and covered up for his crimes.’

Argento was one of the first actresses to accuse the disgraced mogul of sexual assault, telling The New Yorker that Weinstein raped her in 1997 at a party hosted by Miramax at the Hotel Du Cap-Eden-Roc during the Cannes Film Festival.

She claims the mogul led her to an empty room and asked her to give him a massage.

Argento said she reluctantly agreed, and halfway through he began to perform oral sex on her after forcibly lifting up her skirt despite her repeated requests for him to stop.

The actress said that she became suspicious when the party she arrived at was just an empty hotel room, but was assured that people would soon be arriving by Weinstein.

Then, he emerged from the bathroom in a robe and holding a bottle of lotion says the actress, who was just 21 at the time.

‘But, looking back, I am a f***ing fool. And I am still trying to come to grips with what happened.’

The actress said that once Weinstein began performing oral sex on her there was no way for her to stop him because he was so much bigger than her.

‘It wouldn’t stop. It was a nightmare,’ said Argento, who eventually decided to pretend she was enjoying the act in hopes that it would end.

When it was over, Argento said she said on the bed and told her attacked: ‘I am not a whore.’

He laughed at her and said he would put that on a shirt according to Argento, who said that Weinstein contacted her for months after the attack and even began offering her expensive gifts.

Argento eventually relented and over time became close to her attacker, and even engaged in consensual relations with him she admits.

She explained the sudden shift by saying that it was a few months before the release of her 1999 film ‘B. Monkey’ and she was afraid that if she did not agree to Weinstein’s advances he might destroy her career.

The following year, Argento released her film Scarlet Diva, which had a scene similar to the one she experienced three years earlier in France.

In that film, a young actress is cornered by a big producer in a room with one crucial difference.

‘In the movie I wrote, I ran away,’ said Argento.

When she told Weinstein that the character was based on him he simply laughed said Argento.

In has been 20 years now since that encounter, and Argento said she still struggles, especially when she sees Weinstein.

‘When I see him, it makes me feel little and stupid and weak,’ said Argento.

Shortly before the New Yorker story was published, Weinstein asked Argento to meet with a private investigator and give testimony on his behalf.

At the time she had been with Bourdain for close to a year.

The chef and self-proclaimed film fanatic first met Argento in 2016 when she appeared on the Rome episode of his Emmy-winning travel show.

Bourdain and Argento’s relationship became public after the two were seen in Rome together early last year.

The lovebirds could be seen walking around the city hand-in-hand and then sharing a kiss after enjoying dinner at Pommidoro.

The two then returned to their hotel room. 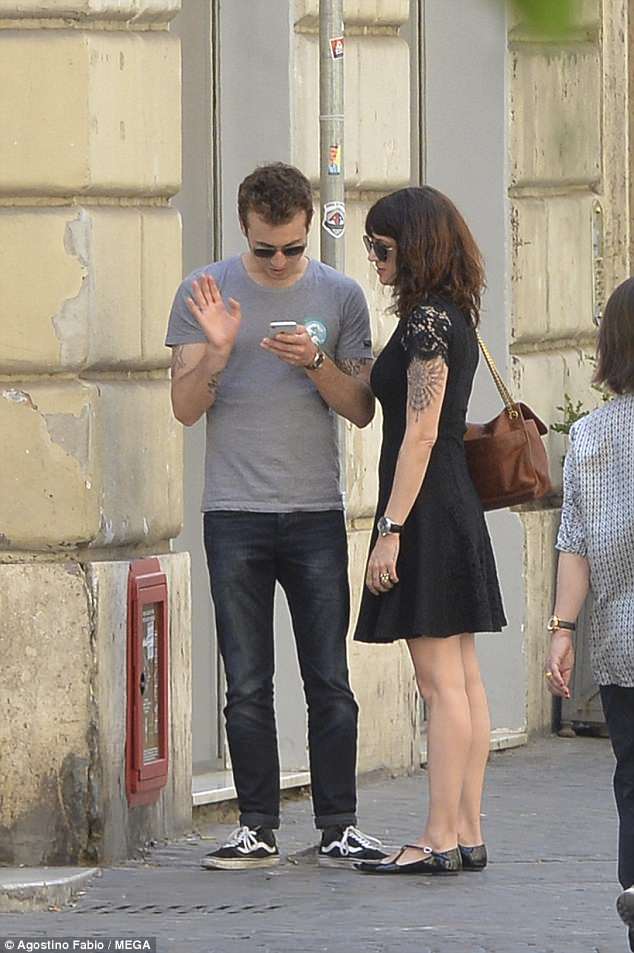 Mom: Argento has two children, an 8-year-old son Nicola with her ex-husband Michele Civetta and a 16-year-old daughter Anna from her relationship with musician Marco Castoldi (Argento and Clement on Sunday)

Argento, 42, first met Bourdain, 61, just around the time that it was revealed that he and his wife Ottavia were separating after nine years of marriage.

The actress and Bourdain’s ex-wife are near look-alikes and both hail from Italy.

Bourdain’s Rome episode of ‘Parts Unknown’ was a remarkable feat, and one that was inspired in some ways by Argento’s father.

Dario Argento is considered by many to be one of the great horror directors, and is known for his highly stylized films, among them the 1977 classic Suspiria.

The episode was shot entirely in widescreen and featured no imagery of classic Rome, choosing instead to show only ‘the architecture of Mussolini and post-Mussolini era.’

Argento helped Bourdain with this by showing him some of her favorite spots and having her sister cook for him.

She even took Bourdain to what he described as a ‘bats*** crazy boxing club where we ate pasta ringside as gladiators pounded one another and the crowd hooted and roared.’

Argento has two children, an 8-year-old son Nicola with her ex-husband Michele Civetta and a 16-year-old daughter Anna from her relationship with musician Marco Castoldi.

She shot to fame as a teenager due to her famous father and roles in a number of Italian movies, receiving the Italian equivalent of the Academy Award twice before the age of 20.

She has appeared in a number of films over the past decade, most notably Marie Antoinette, Boarding Gate, The Last Mistress and Mother of Tears.

In 2014 she premiered her film Misunderstood at the Cannes Film Festival, which she wrote and directed, telling the press that she was done with acting.

Bourdain was a fan of the film, which he called ‘remarkable and beautiful.’

After the two met, he posted a pic of Dario with his young daughter on Twitter, writing: ‘Happy Birthday to the master.’

Argento shared a photo of the pair last week in Firenze that showed them embracing after wrapping a new episode of Bourdain’s show.